About Boston: One of the oldest cities in the United States, Boston was named so by its early American settlers, who hailed from Boston, Lincolnshire in England. In addition to its official distinction as the capital of the Commonwealth of Massachusetts, Boston is also widely regarded as the unofficial "Capital of New England" due to the prominence of its geographic size and the magnitude of its contribution both culturally and economically speaking to the entire region.

Boston's climate is characterized by the constancy of precipitation throughout the year: frequent rain showers during spring and autumn, sudden downpours in the summer, and heavy storms during winter. Barring this factor, though, one would be hard-pressed to come up with a general account of Boston's seasonal patterns, which rarely repeat from one year to the next.

Parking in Boston: Mark Twain called Boston's streets a "Modern Cretan Labyrinth" after his first visit to the city in the 1860s and marveled at how he and a companion "passed one spot seven different times and approached it from a different direction every time." The literal crookedness of Boston's streets continues to the present day, and while the narrow, winding layout is often thought charming by those traveling on foot, it can make on-street parking doubly tricky for vehicle users.

Parking Meters Parking meters are in operation from Mondays to Saturdays, 8AM - 8PM; signage on parking time limits can be found in the vicinity of the meters. On Sundays and legal holidays (i.e., on the day the holiday actually falls on and not on the day offices may be closed in celebration of the holiday), parking meters are free and no time limit is enforced. Complete details on parking meter regulations can be found here (link directs to the city's website).

Parking Prohibitions during Street Sweeping and Snow Emergencies When parking in Boston, one needs to be mindful of the city's street-sweeping schedules, as parking is prohibited in streets and parkways during designated sweeping times. Boston has also designated certain streets to be "snow emergency arteries" and prohibits parking on these areas during declared snow emergencies.

Visit the official website of the city to get the latest information on Street Cleaning and weather emergency parking schedules here. You can use the form on this page to search schedules for posted street sweeping, to see when parking restrictions take effect.

Resident Parking Another important thing to note about parking circumstances in Boston is the fact that the city has a Resident Parking Program (RPP) in place. This translates to numerous parking spaces along Boston's residential streets being labeled "Resident Parking Only" and thus, available only to residents who possess a Resident Parking Permit. A smaller proportion of spaces on these same streets are labeled as "Visitor Parking" spaces and can be utilized by guests of neighborhood residents. For more details on Boston's Resident Parking, you can visit the city's official RPP page.

Parking Garages With the parking restrictions brought about by RPP and the limited parking time afforded by metered parking, certain parking needs will necessitate a search for alternatives to on-street parking. Parking lots and garages present a viable option if you find yourself having to park in an area for which you don't have the proper permit or if you ever need to park longer than parking meters allow. If you regularly park in an area, a monthly or even long-term membership to a lot or garage could prove to be a worthy investment.

Visit BestParking.com for a full interactive map online showing all parking garages available around the city of Boston and reserve your space now! 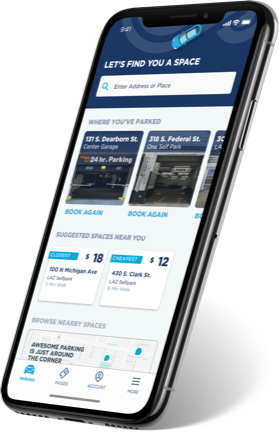 ParkWhiz and BestParking ©2023. All Rights Reserved.TERMS OF USE
Top